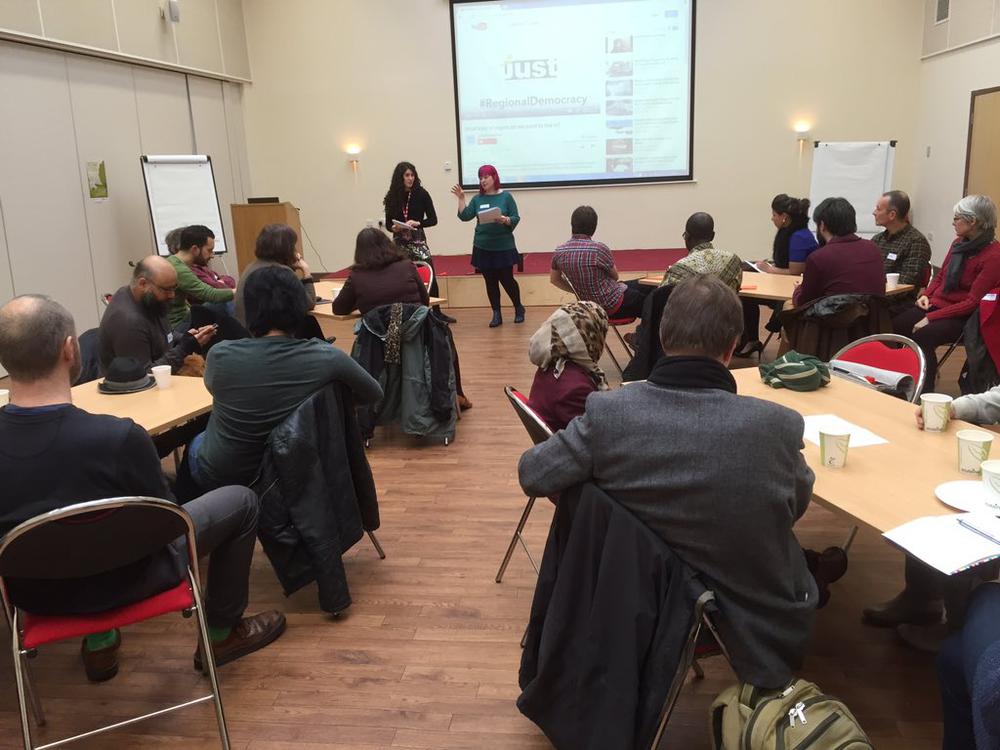 Same Skies began in the Spring of 2015 and our first public event was an open space conference in Manningham, Bradford in November that year.

At the time, the first city-region devolution deals were being announced, initiated by the Conservative-led central government, and beginning with Manchester in November 2014.

We were enthusiastic about political responsibility coming back to our region.

Even the "flawed" city-region deals felt to us like an opportunity to build on, no matter how imperfect, and regardless of where they were initiated. If we wanted devolution to be done better, it was our responsibility as citizens to grasp the opportunity and transform it.

Some of us were already involved in other grassroots devolution campaigns, and we'd all been to plenty of public meetings, so we were able to draw on those lessons in planning what we wanted to do.

In the context of the devolution process, the most radical choice was the most obvious, and is still unusual years later.

We decided to hold the event on a Saturday.

Devolution events are almost always for a proffessional audience, on a working weekday, when people can only come along if it's part of their job. Some civic leaders then use that as a pretext for saying there is no popular interest in how the places we live and work are treated by a remote central government, and we should just leave it to them to negotiate.

We then made a choice to hold the event outside of a city centre, in a residential area of Bradford that is recognised as having a diverse population. We all knew enough about the failings of public transport in West Yorkshire to know this might have a affect on attendence, but it was an importnat enough as a founding principle to take the risk: rather than expecting people to come to us, we would go to them. Establishing this principle later led to our visits to makets.

We decided to run an open space conference. Open space is a long standing way of hosting an event without a pre-set agenda. We felt that if people cared enough to come along, we should ask them what they wanted to talk about.

This structure allows the bredth of knowledge in the room to emerge, and for new connections to be made. Even as a think tank, we still see it as one of our most valuabel purposes to facilitate that emergence and exchange.

We put together a small amount of money to help with travel costs for people who were hard up, and offered childcare.

The event was hosted and facilitated by Peg Alexander along with Leila Taleb, one of the original group, and Leila also did some of the very interesting additional creative conscientization to promote the event in advance, and on the day 30 people came from Bradford, Huddersfield, Halifax and Leeds to talk about their experiences and their hopes for the future of the region.

There is a short summary of the event, and we've written about what followed. 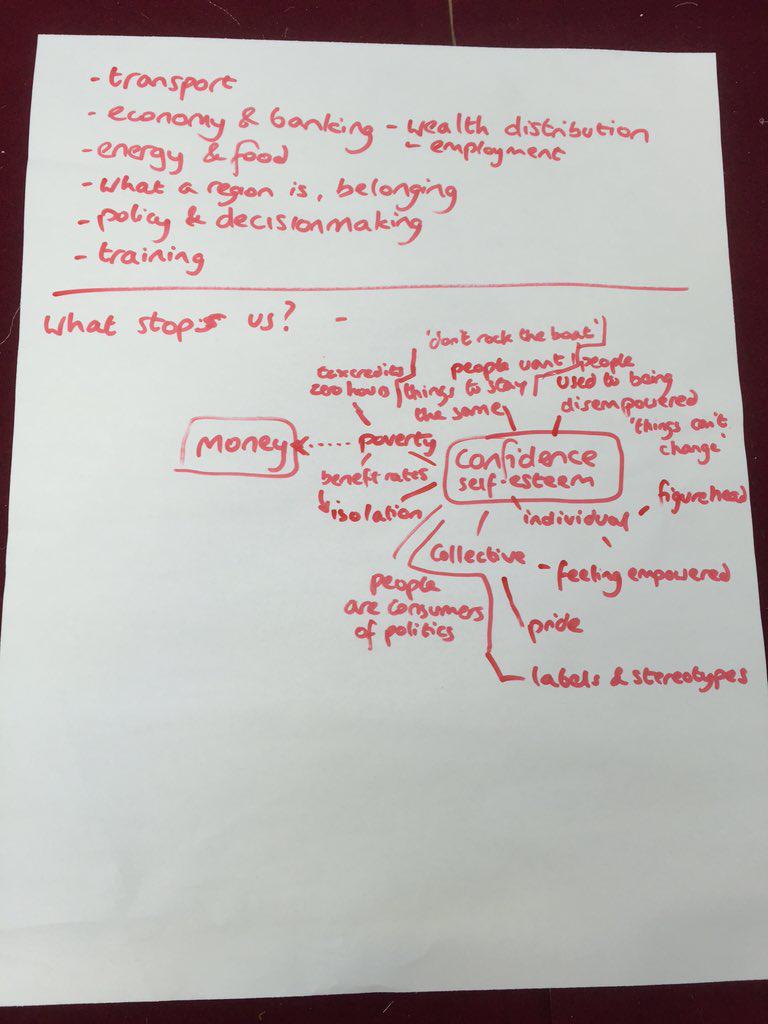 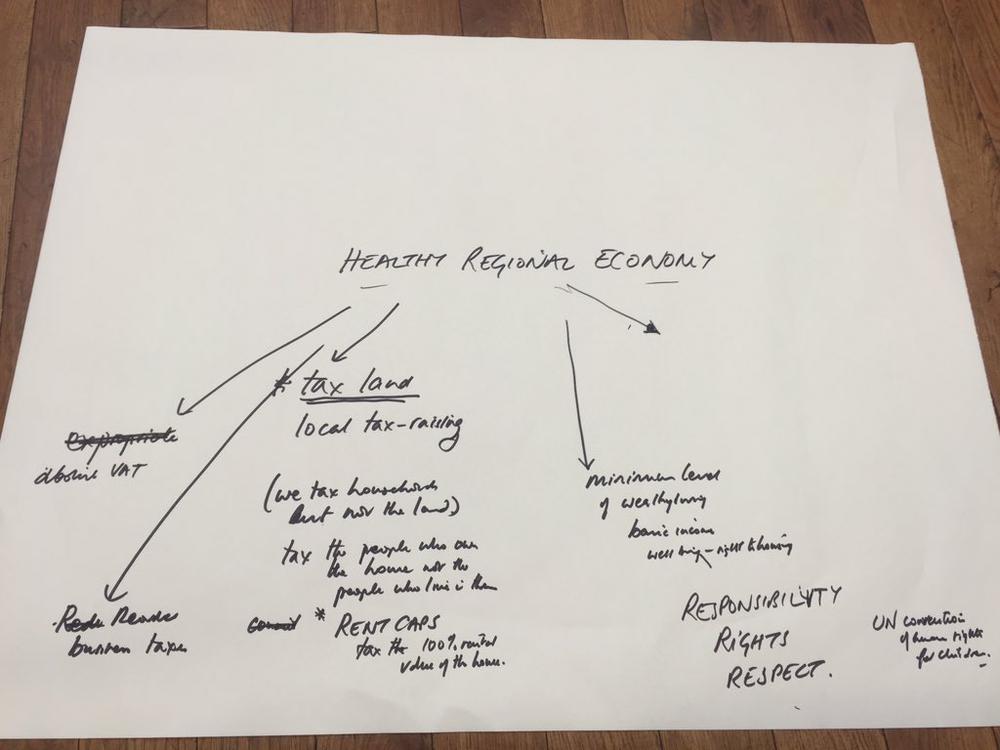 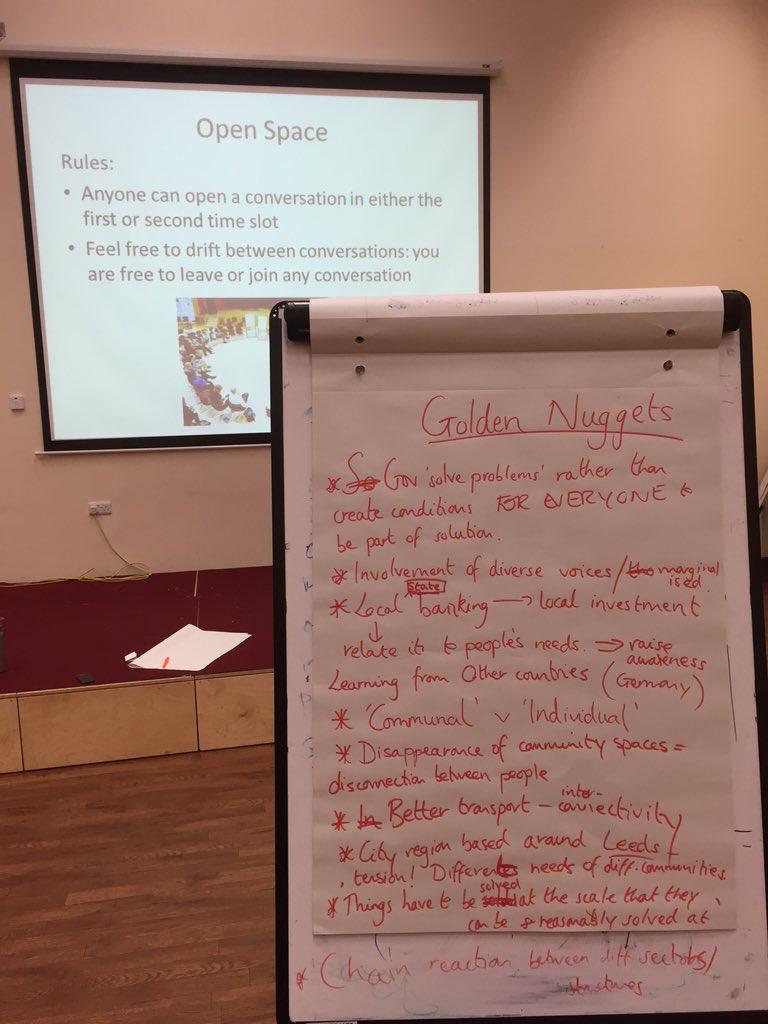 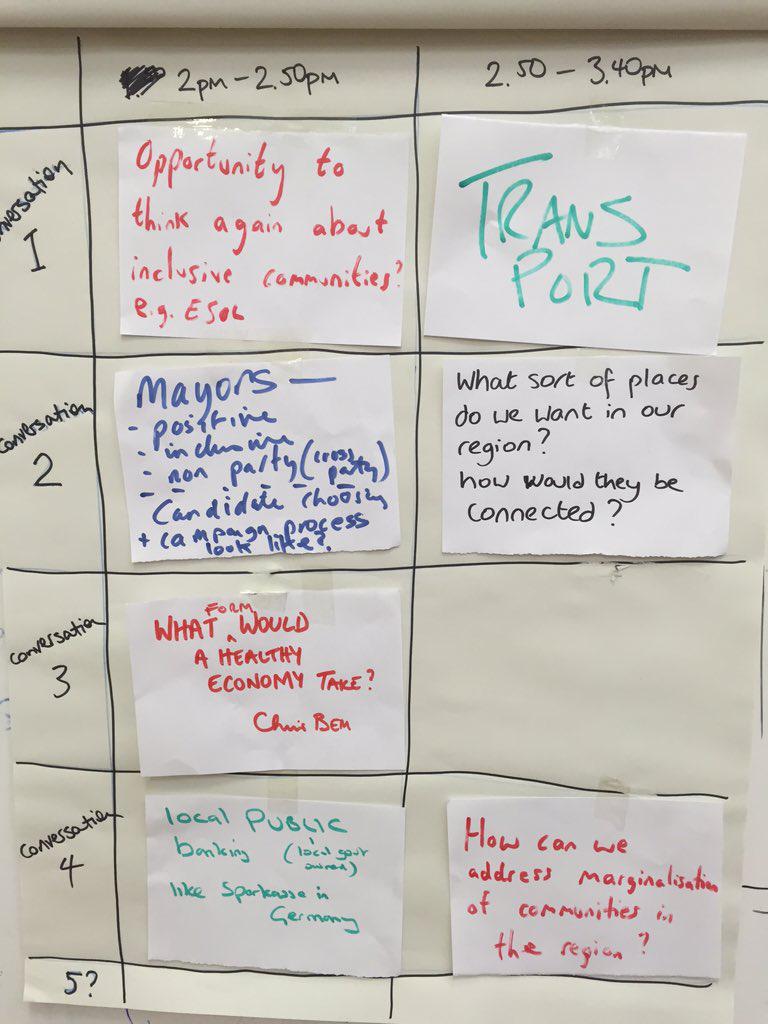 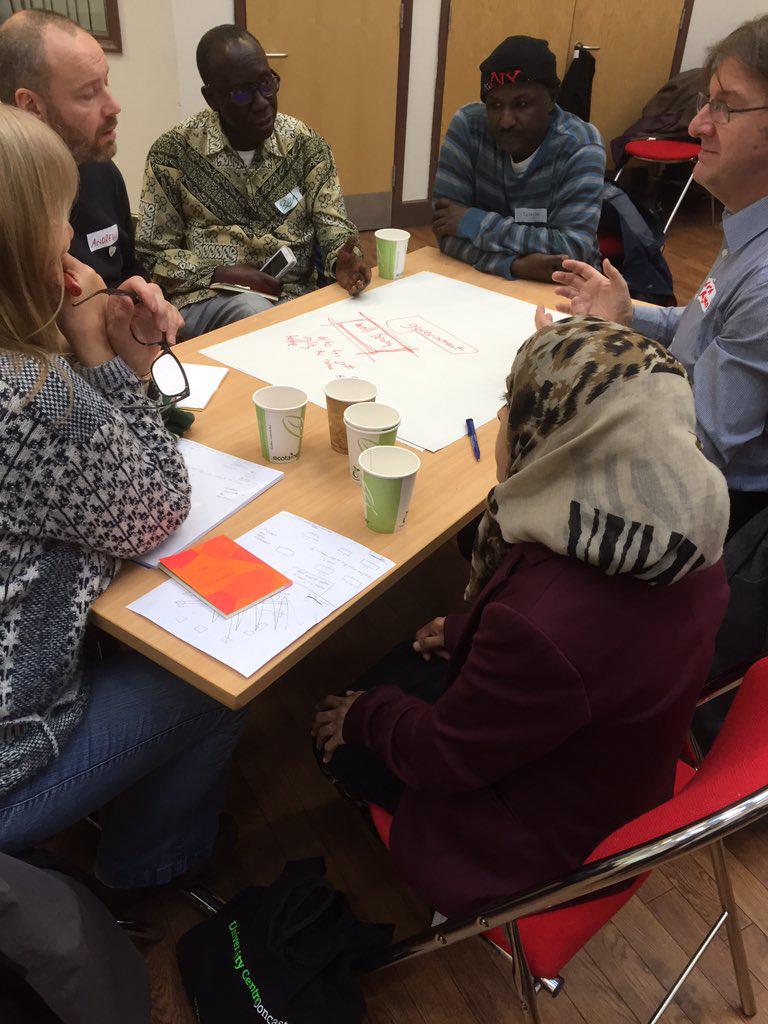 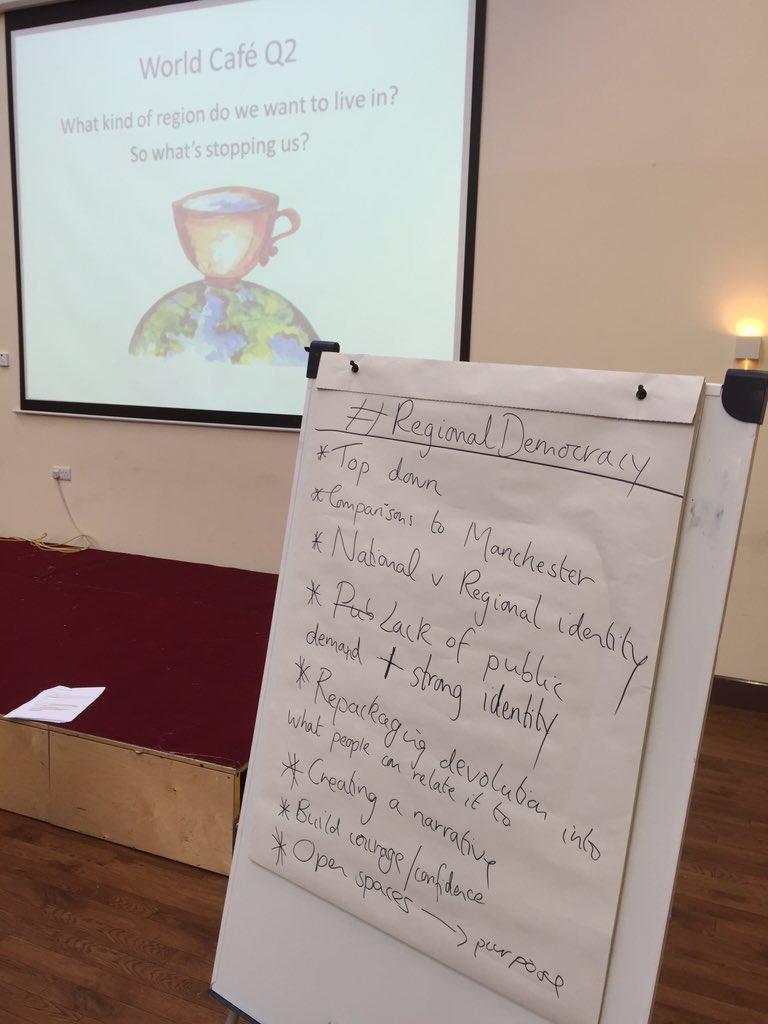 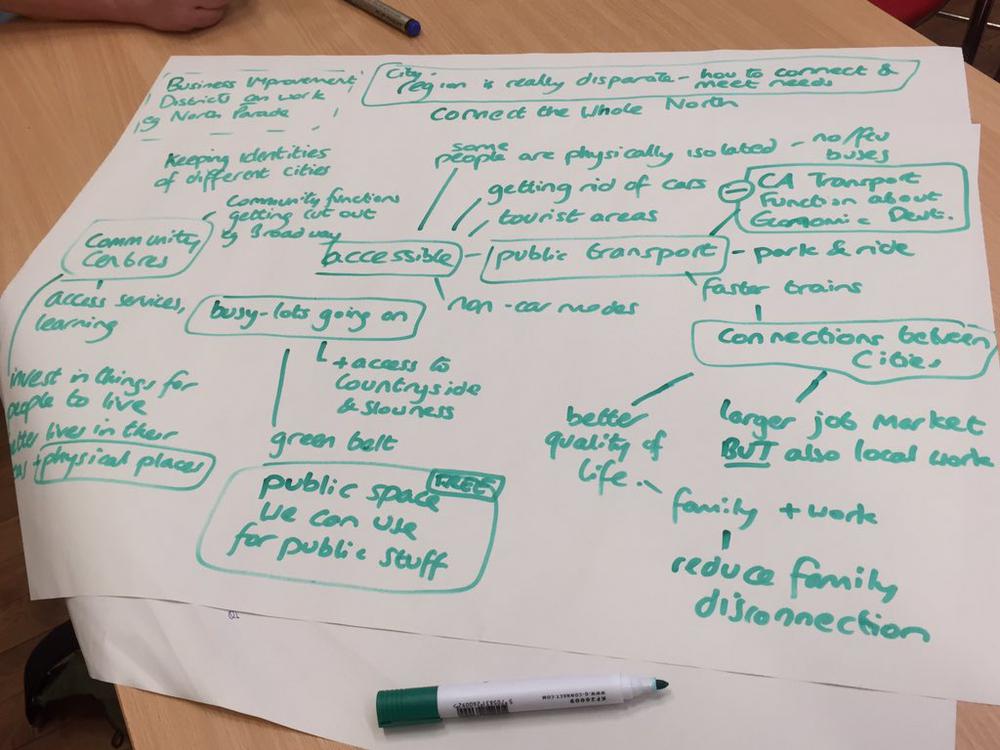 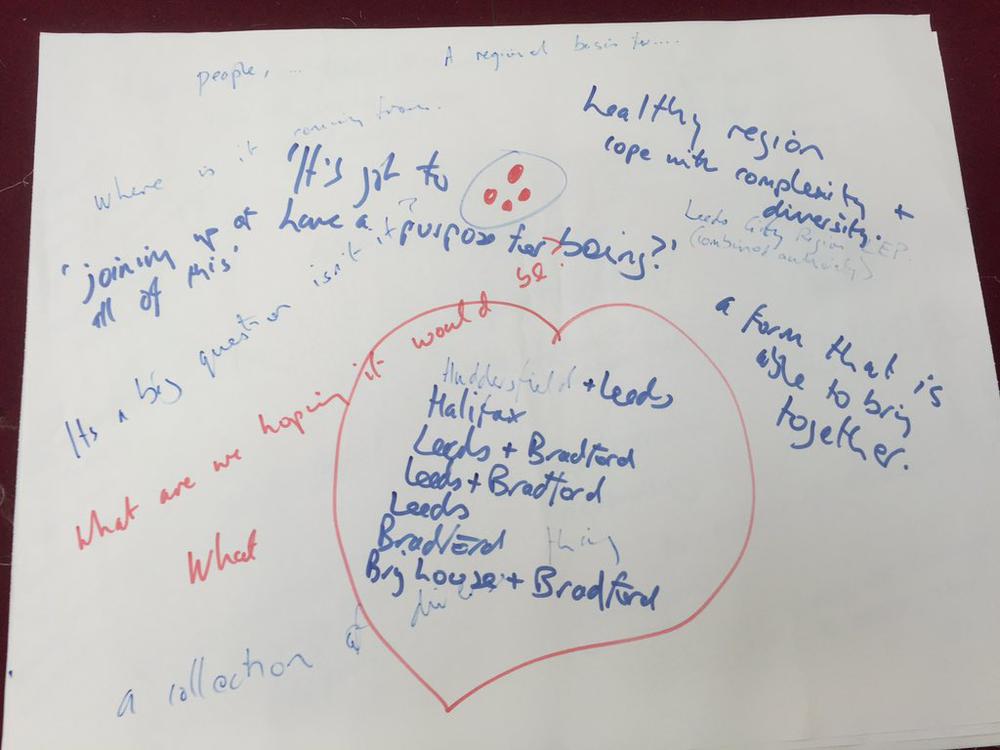 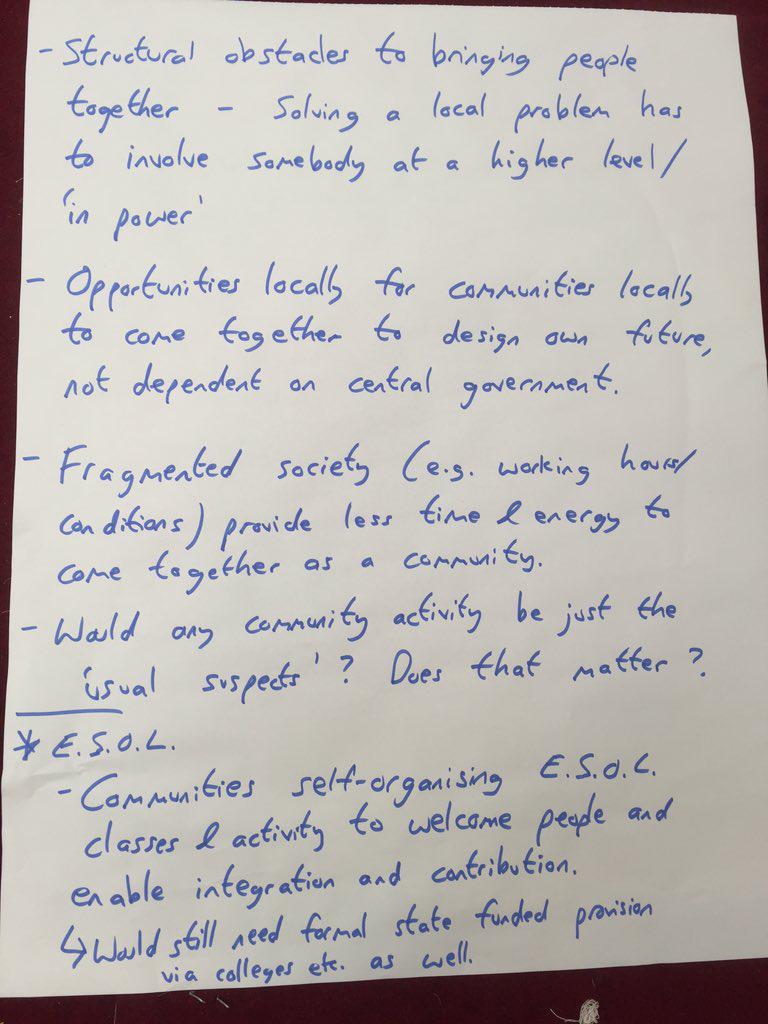 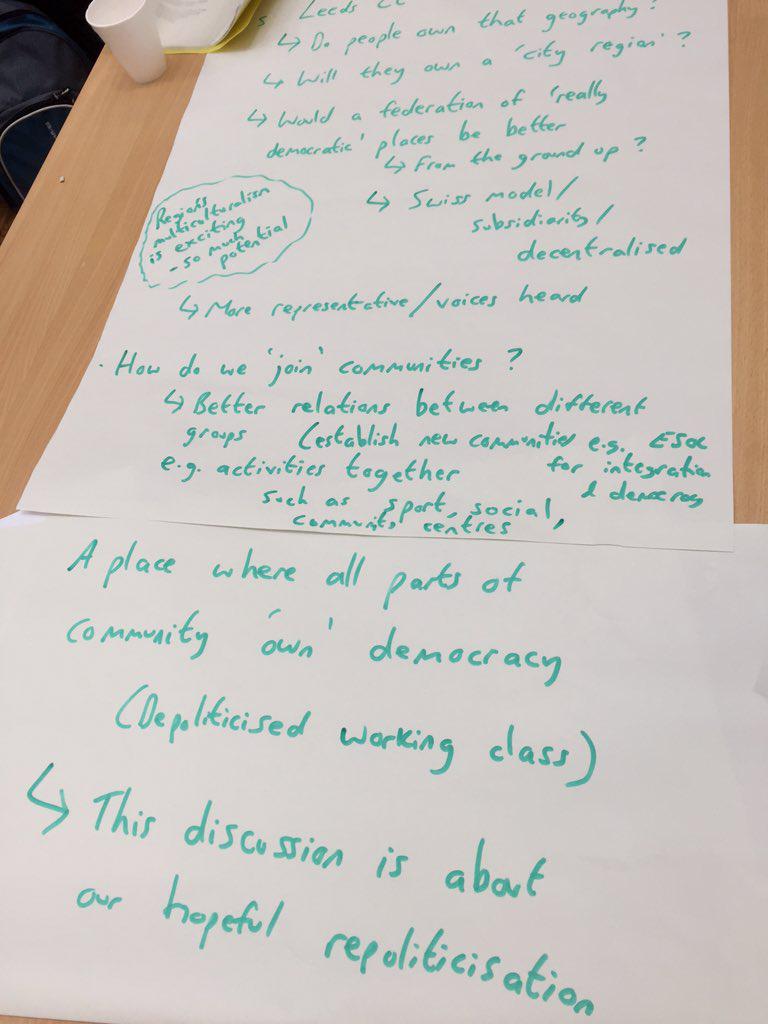 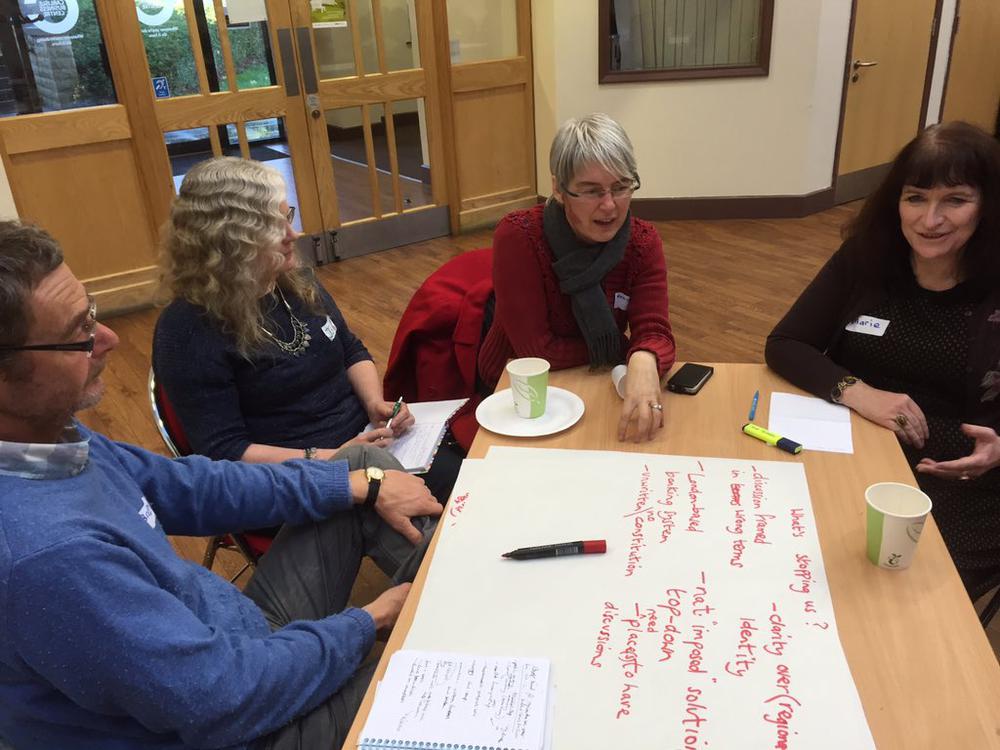 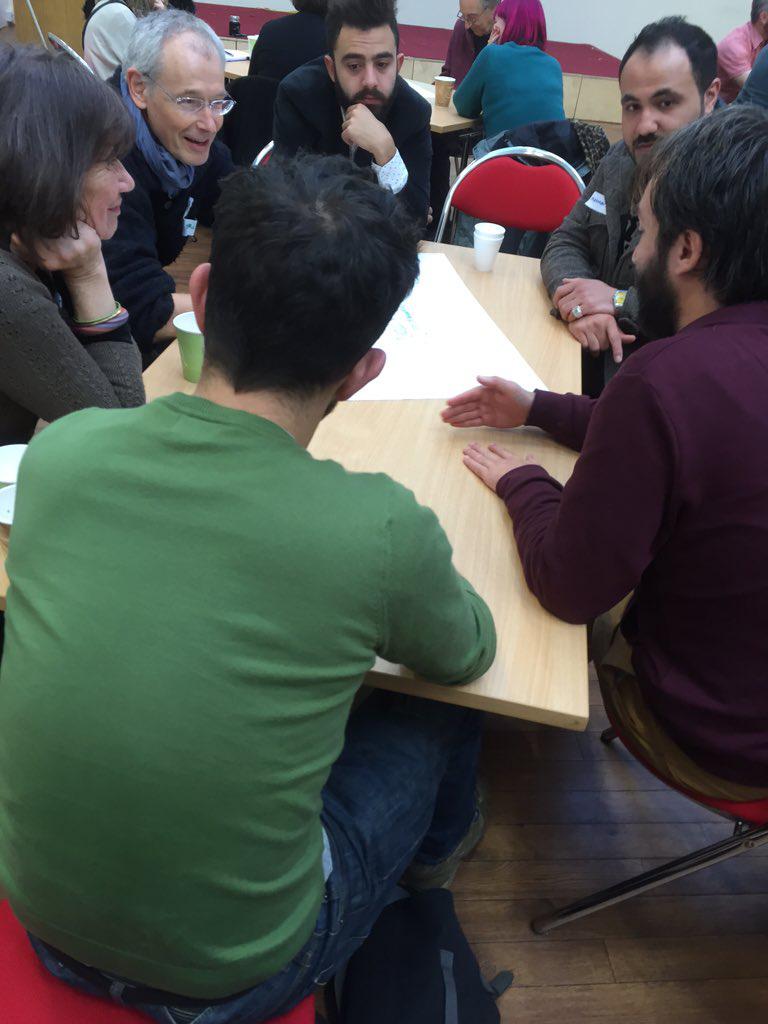 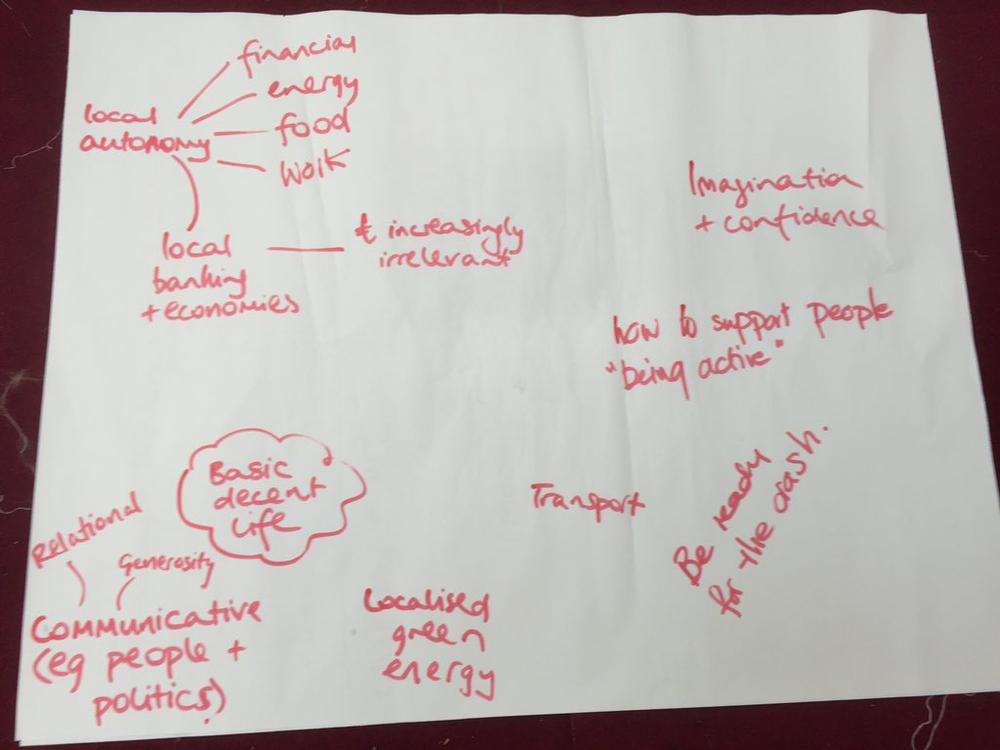 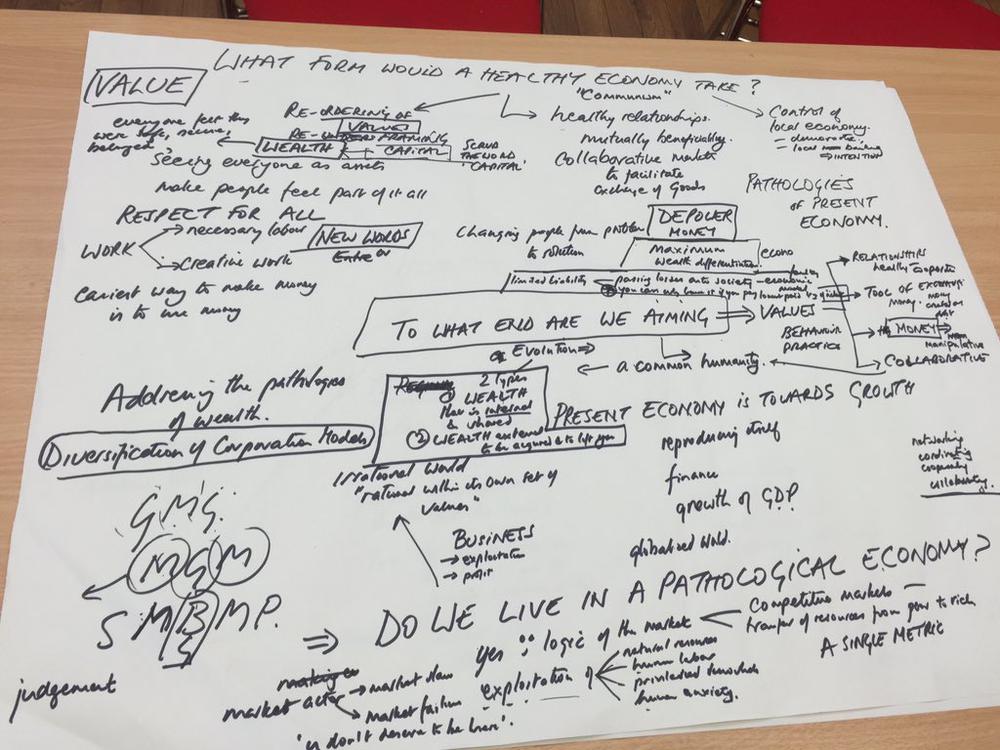 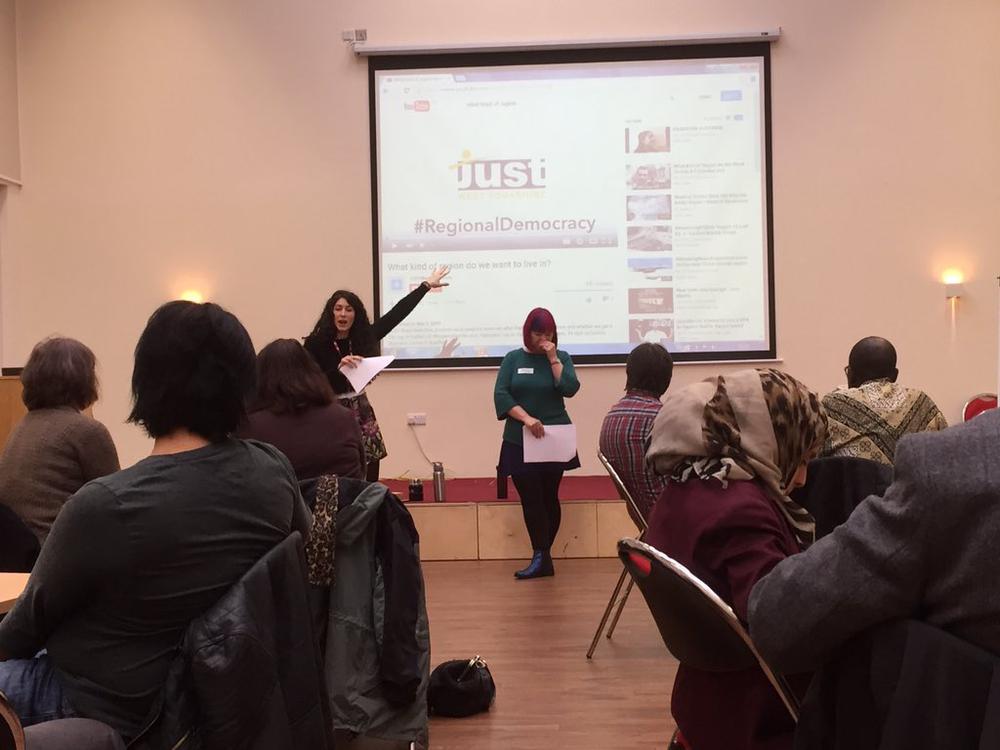 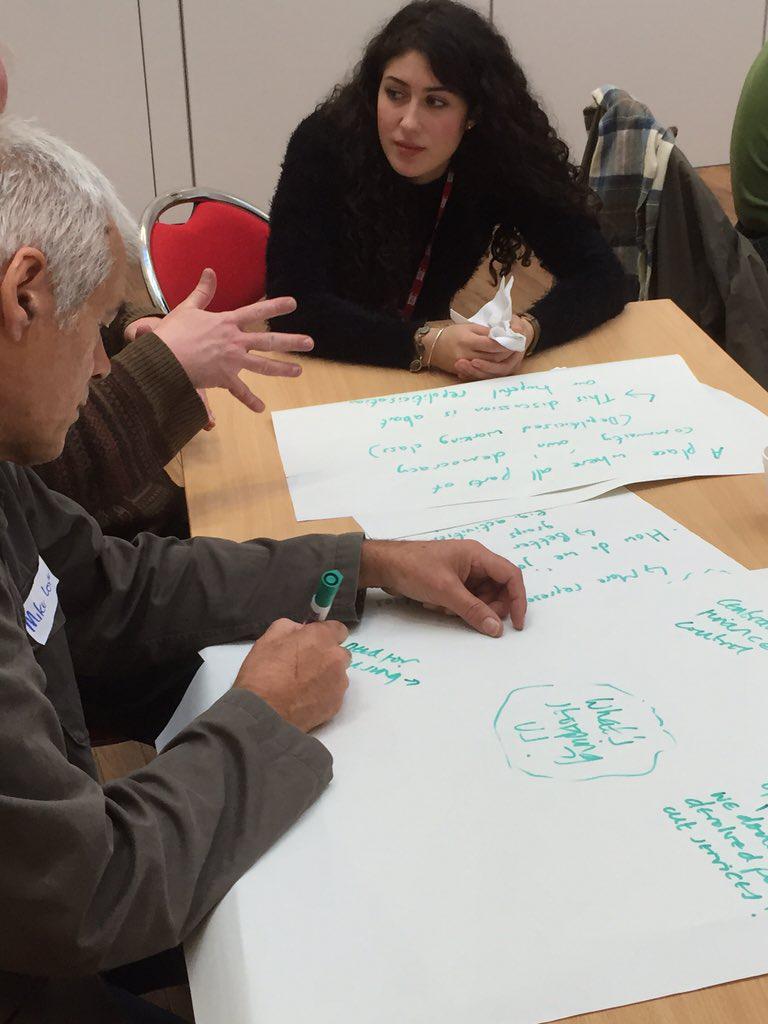 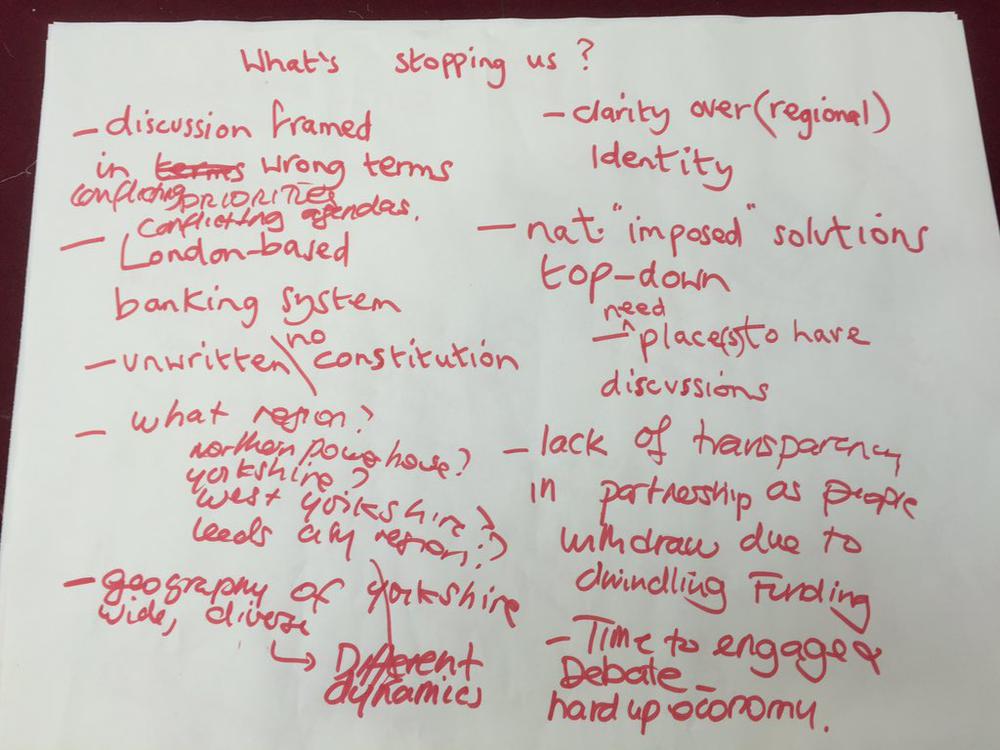 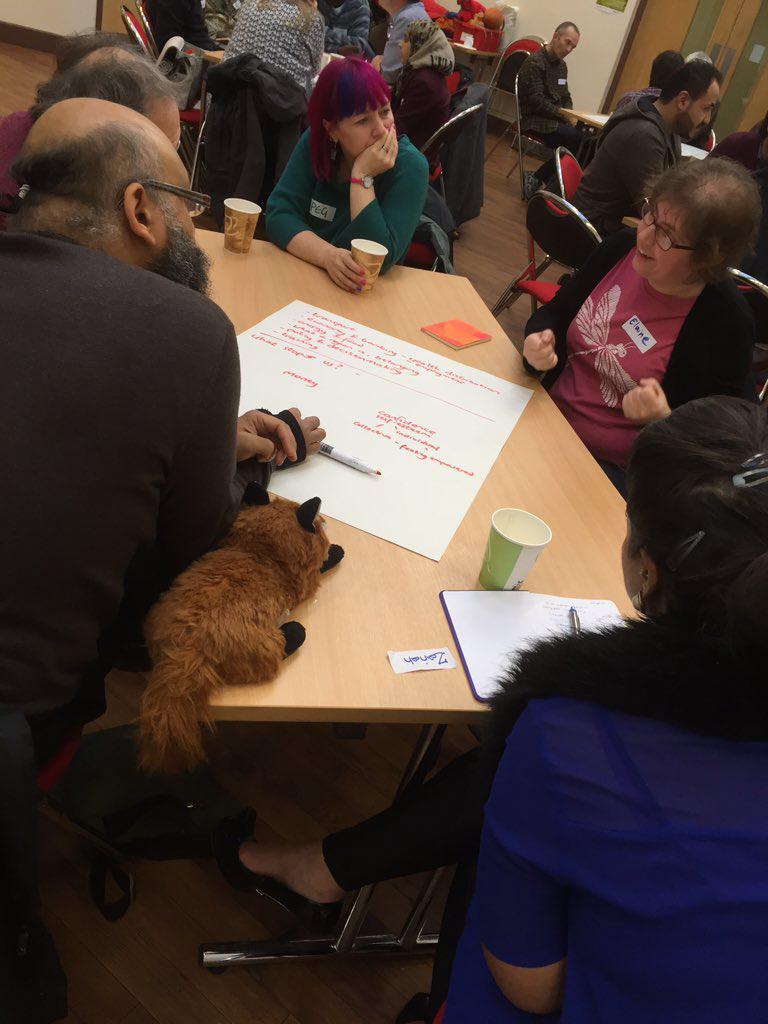 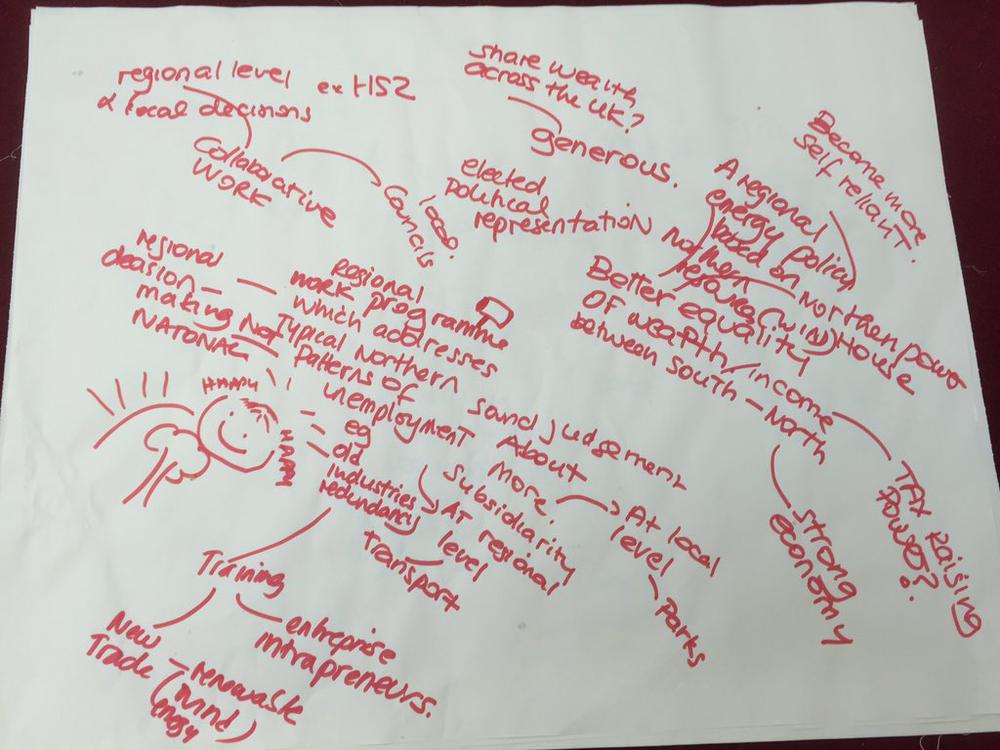 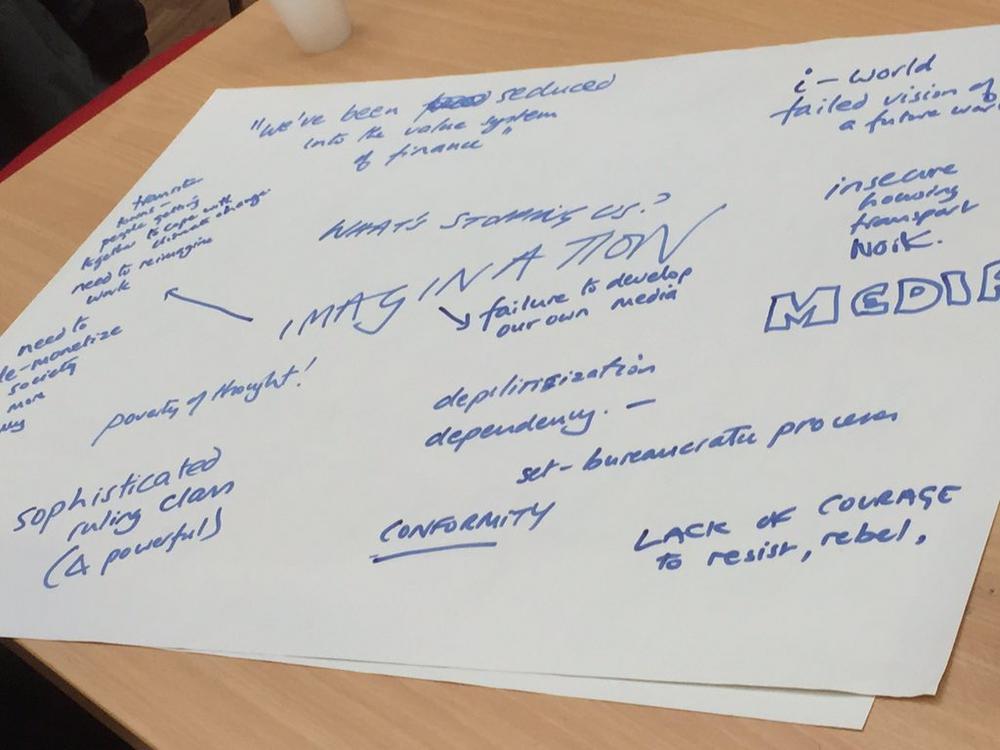 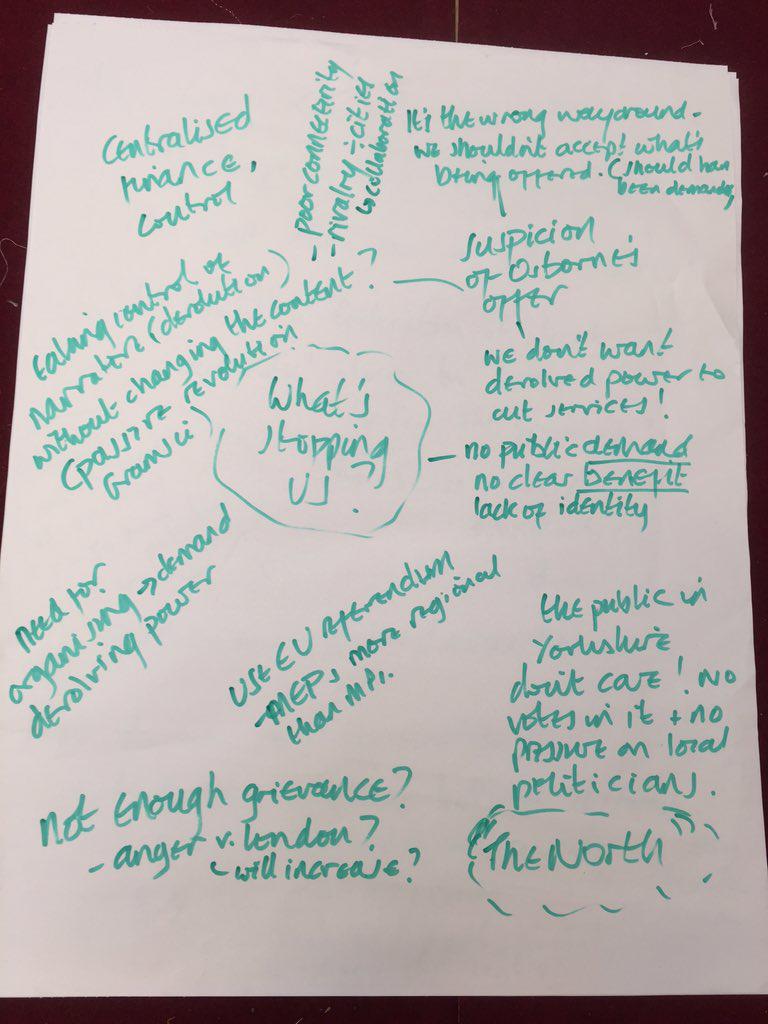 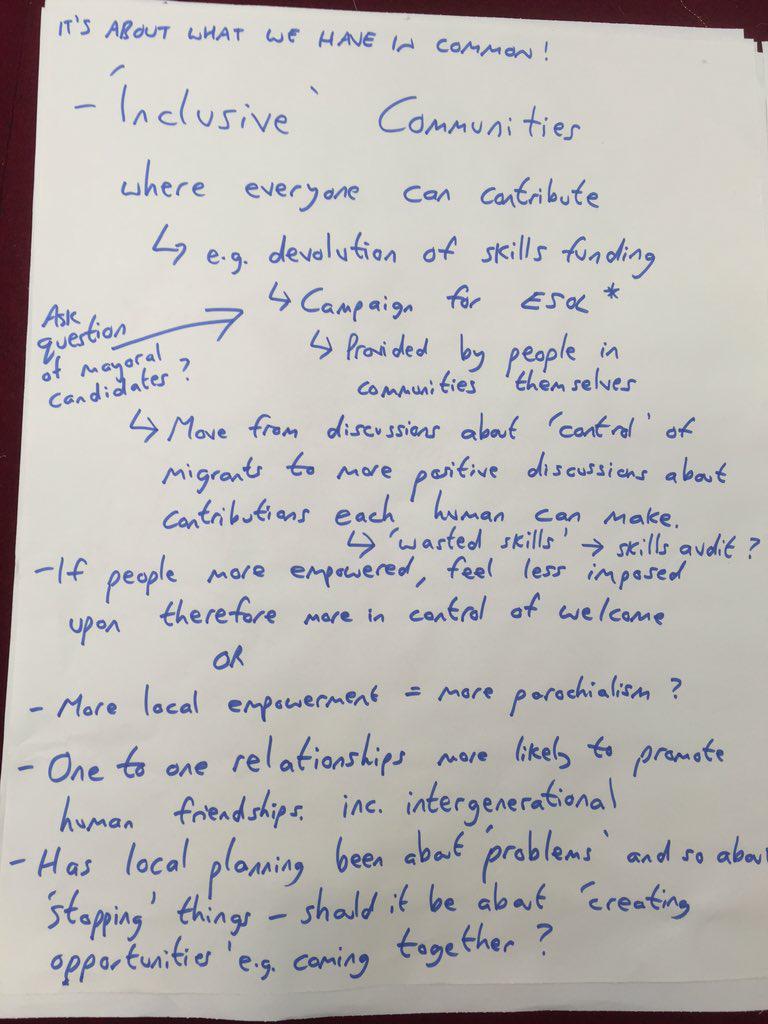