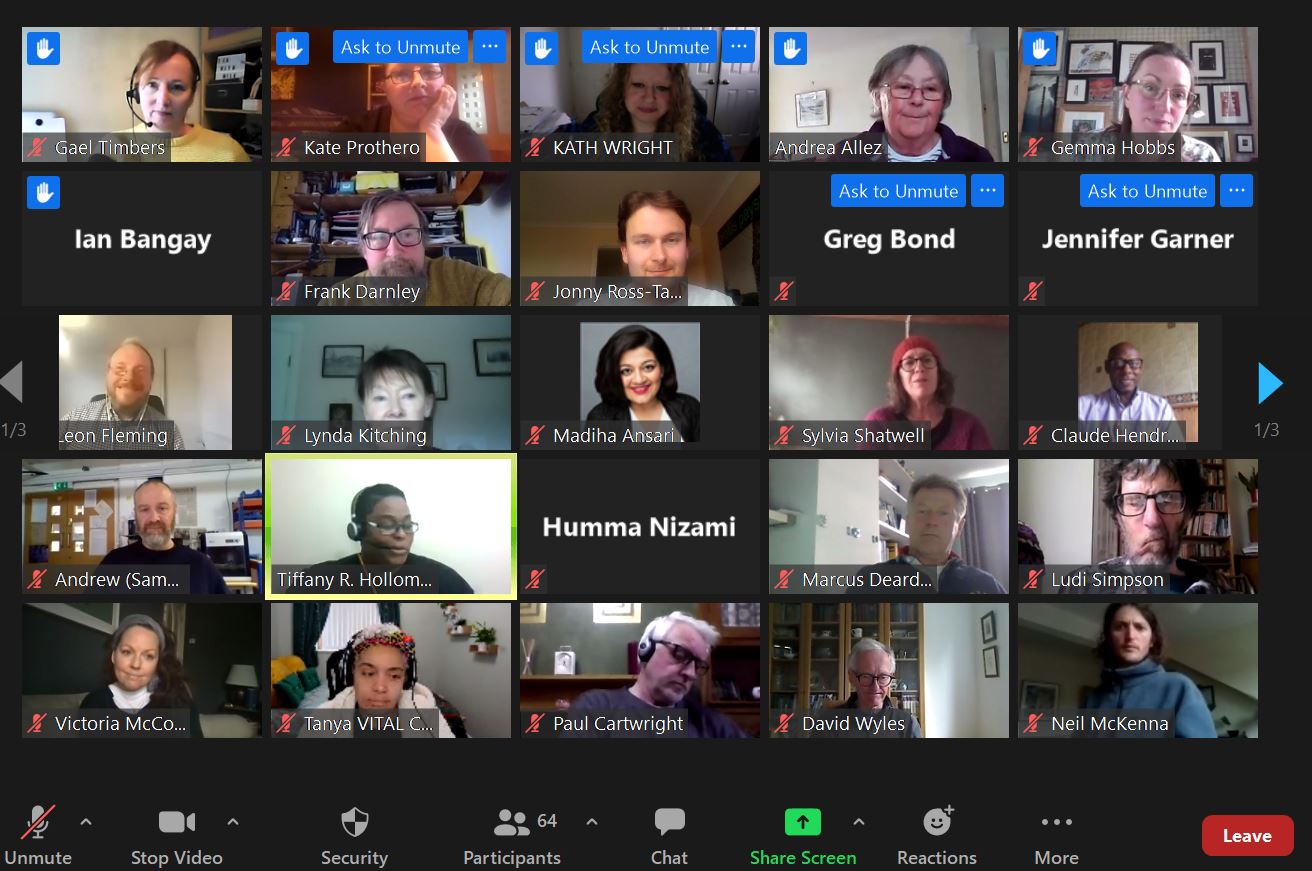 We invited everyone who wanted to to give a two minute introduction the themselves and the work their organisation is doing ( or post the same in the chat), with the aim of sharing knowledge and information between different parts of West Yorkshire and making unexpected new connections.

After the introductions, the candidates for West Yorkshire mayor gave their responses to what they had heard, followed by further discussion.

At the end of the session, Tiffany Holloman of Same Skies asked the candidates to commit to regular meetings with grassroots groups if they were elected:

"If elected as Mayor, I'll commit to keeping one half day per month free to talk directly to grassroots organisations across West Yorkshire.

I'll publish afterwards which groups I have met."

All of the four candidates were happy to commit to that, and suggested that if anything it wasn't enough.

The day after the session, we emailed everyone to ask "What stayed with you from Listening to West Yorkshire?"

The responses to that question are below (alphabetical order by second name).

"It was great to see/hear about so many other voluntary and community organisations and comforting to hear that everyone had the same message of start in the community! I thought the candidates that attended were open in their responses and seemed to be placing communities at the forefront. I was disappointed that the Labour candidate (Tracey Brabin) wasn't present, I didn't manage to log on for the very beginning so didn't hear (if there was) an explanation. It will be good to keep the actual Mayor to a monthly meeting with the voluntary and community sector as we represent thousands of voters!"

I guess it went slightly downhill for me when the candidates began answering questions. No fault of any individual or the session, just reminded me how large the West Yorkshire area is, how many different priorities there are of all the people working there, and, realistically, how little resources/power the Mayor will have.

But I am glad you requested that there be a regular session for grassroots organisations to be listened to. It would mean a great deal if the Mayor did commit to this."

##### Francesca Gains "Such a diverse range of people and organisations represented. The reach seemed very wide in terms of activity and geography. And just to share thoughts from a perspective of working with another campaign organisation through lockdown [https://www.gm4women2028.org/](https://www.gm4women2028.org/). I think virtual events can really extend the reach (with some obvious and important caveats obviously) and we found that taking the time to let people introduce themselves is important even through it can take a while! It seemed to me that was happening through the hustings. I feels like there is a momentum building. Hopefully the new mayor will be glad to have a portal to engage at some point."

"Thanks for organising the event - worthwhile, with the use of zoom an advantage in drawing in people from across the area. Attendees inc candidates were all able to have a say."

##### Warren Nicholls, CREW "Hello Andrew, I joined late (30mins) the Mayoral candidates were quite impressive. I'm looking for an Andy Burnham type strong person. I couldn't quite figure out how to join in. However it was so good you should do it again soon keep the pot boiling so to speak. I caught quite a few of the 2 minute introductions also enlightening as to the variety of people, organisations and interests."

"It was really interesting attending the event. It is the first political campaign event I have ever been too.

A few things stood out:

A brilliant mix of people from across West Yorkshire, representing different places and activities.

A surprisingly high number of arts organisations! Or maybe this is very usual for events like these?

Tiffany's fantastic chairing of the event... "Devolution is for us!"

The need for our Mayor to fight for Universal Basic Income.

The phrase "Hyper-Local" I liked that.

##### Kath Wright, Colouricity and CollaborARTi "Many thanks for organising yesterday's zoom... it was really interesting and I think 60+ attendees was a great turnout. I thought the zoom session was hosted very well and a nice mix of networking, candidate pitches and interaction/engagement with the candidates and the audience. A few impressions left... • Andrew Cooper's love of Yorkshire's green rolling hills - linking the colour green with colour of the party he leads • Observing who listened to the questions and answered them fully in the order they were asked • The banter between candidates • One candidate's out right refusal to trial the Universal Wage concept • One candidate wanting to be known for being 'loud' • Meeting new like-minded professional people"

"What stayed with me was the passion of some of the candidates who clearly want a better deal for the region, i think the repeated message regarding the lack of resource available to lead on projects and implement change was a resonating message for me. There is need for a big shift in the current systems and structures to lead to a healthier society and with better connected and included citizens can not be achieved on thin air

Thank you for hosting the event - I really appreciated the opportunities to learn and engage."

"Sorry for the late reply. I thought it was a really fascinating session with some strong, linked themes including pollution, biodiversity, green spaces , mental health and wellbeing, housing, buses and transport, diversity. For example young people are affected by lack of transport, poor housing, in turn linked to poor emotional health not only in childhood but as they grow into adults. It is well evidenced that green spaces promote biodiversity and sequester carbon and are good for everybody's mental health and well being and yet our green spaces are under threat from housing and transport. What really struck me is that people or organisations are trying to address these issues in isolation, and build their campaigns around specific areas of interest or party politics. In an ideal world we could join forces , reduce waste and better spend our collective resource is if these themes were integrated or at least approached in a better integrated way.

There was a brief reference made to involving children and young people and I will be interested to see how this actually plays out in real life. I wonder how well resources will be used for those families who have been most disproportionately affected by covid?

My final reflection is on the idea of collaboration rather than consultation. All candidates said that they would commit to monthly meetings . If they are true to their word this would be an excellent opportunity to try and develop initiatives that integrate more than one theme.

I'd be very interested in coming to further meetings."

##### Jack Simpson, Hyde Park Book Club, Leeds Uni - Polis, Digital Access West Yorkshire, Eiger Studios "Things that stuck with me; 1. By a long way, the absence of TB. Really think that's difficult. 2. The intros were nice, but long. Maybe worth it for the deliberation factor. 3. Would've been good to see more debate and difference. For some reason it felt like it was quite easy for people to stay in general agreement. Fair play to the Tory guy who openly rejected UBI! Not my position, but was good to see a stance. 4. The great vibe that Same Skies brings!"

"Dear Andrew and Same Skies I joined 5 minutes late so may have missed it, but what reason did Tracy Brabin give for not attending? Was she given the opportunity to send a representative, if she had other engagement? If so, what did she say to that?

I'm concerned as a Labour member! And I noticed a Labour local candidate on the zoom too."

##### Kathleen Smith, Morley Art Gallery "It was so interesting Andrew. So well managed. There is such a lovely bunch of creatives in the region that seem to have a genuine drive to improve the area."

"I had to dash just before the end but all of the candidates there came across well and keen to engage - it's a shame that Tracy Brabin didn't attend."

##### Rosie Watson, BMDC "Enjoyed the event it was useful for me to see the candidates and get an idea of where they were coming from."

Regional Democracy and the EU – a view from West Yorkshire

This blog reflects the personal views of Leila Taleb (Bradford), Andrew Wilson (Huddersfield) and Ian Martin (Leeds). All are members of the Same Skies network …