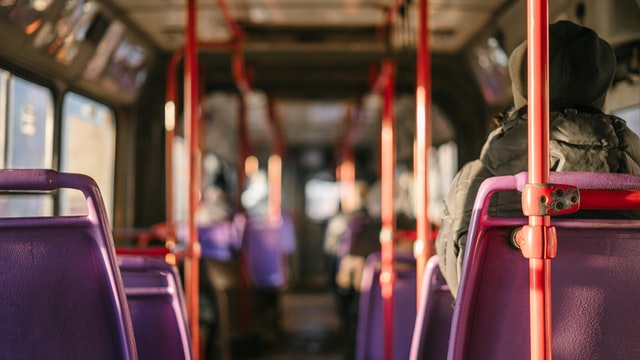 Matthew Topham from the Better Buses West Yorkshire campaign explains who owns and runs our buses at the moment, why our services are so bad compared to London, and what needs to happen for people in our region to enjoy the same quality of service as London and Manchester.

How are our buses currently run?

Since 1986 buses outside London have been deregulated. This means private operators are free to set their own fares, routes, and standards.

As a result, they cherry-pick only the most profitable routes to run, capturing all the fares in those areas. This means quieter, but essential, services such as those linking rural Calderdale to local hospitals, mostly do not get run.

In a few cases a local authority may choose to pay over the odds for operators to run these “socially necessary” routes. However, any funding for these services means cuts to other parts of the Councils budget. Campaign for Better Transport research shows that 54 local bus routes in the region were lost or reduced in 2019 alone.

Under deregulation operators are also free to set their own fares. That is why fares have gone up by 55% in the last ten years over the UK.

With an expensive, irregular, and patchy bus network it is not surprising that bus passenger journeys have fallen by 60% in Yorkshire since deregulation came in.

In London, where they have buses under public control, passenger journeys have more than doubled in that time.

How would things differ under public control?

The official name for public control is franchising. This system would mean private operators could only run a bus service if they had won a contract from the Mayor to run a part of the network.

These contracts would set the routes, fares, and standards for the operators in a way that was responsive to the needs of our communities, not just private profit. The Mayor would be able to improve employment, safety, and environmental standards with one stroke of her pen, not after months of horse trading with private companies.

As the Mayor controls all the region’s fares, just paying a set contract fee to the operators, public control allows the introduction of cross-subsidy. This is where the profits from those busy commuter routes (that are almost entirely paid out as dividends in the current system) could be used to restore lost rural, evening and weekend routes.

What is an Enhanced Partnership?

The most important thing to say is that partnerships are still deregulation and not public control.

Enhanced Partnerships are just the latest in a long line of add-ons and paint jobs that have tried to improve our deregulated bus network. The issue is that whether they are voluntary, quality, or enhanced partnership they all rely on private operators making improvements of their own volition.

If the network were going to improve in private hands, it would have happened sometime over the last 35 years. The Government, and West Yorkshire politicians, will say that lots of the benefits of public control are possible under Enhanced Partnerships.

While you can introduce some multi-operator and multi-modal tickets, it is far from true integration. The incentive to compete with different operators (and between buses and trains) remains. What is more, every operator would still be obliged to offer a fare that just applies to them, undermining the delivery of truly integrated ticketing. Yorkshire residents would still be left asking if they were getting value for money when they travel by bus, one of many reasons so many people use the car now.

What does the National Bus Strategy mean for West Yorkshire?

The National Bus Strategy sets out a series of deadlines and requirements for local transport authorities to retain access to essential funding. This included the COVID-19 Bus Services Support Grant (CBSSG) that has kept public transport running while fewer passengers have been paying fares and a £3bn pot of investment in local bus networks.

The three key deadlines are:

The reason the Department for Transport requires most councils that are pursuing franchising to create EPS in the meantime is to deliver some change, however moderate, quickly. They feel that the “public expects swift improvements.”

This is a reasonable assumption, but the Government does not back it up with any evidence. Compare this to West Yorkshire where, leaving aside the Mayor’s electoral pledge to investigate public control, a poll from the Northern Powerhouse Partnership shows that 50% of residents are in favour of public control, with just 8% against it!

It seems more likely that the public would be angry that they must wait longer for the real change provided by public control because of a partnership rather than the other way around.

The Department of Transport initially said it would remove the EPS step if a local authority shows it can deliver franchising especially quickly. Indeed, our subsequent investigation prompted a response in Parliament. This clarified that, if a Local Transport Authority is pursuing public control "as their only option" it only has "to be actively following the franchising assessment process to be eligible for future funding." This is a very low bar to pass, one West Yorkshire should easily manage.

Few authorities have done as much work on franchising and bus reform as WYCA. The latest work conducted by West Yorkshire on buses, funded by £150,000 from the authority, is even larger than the initial funding given to local authorities under the National Bus Strategy (just £100,000).

This reserve of institutional expertise, combined with lessons learnt from Greater Manchester's successful attempt at franchising, means West Yorkshire should be able to finalise the statutory process of investigating public control in Brabin’s three-year term. That will probably only be possible if they start now and are unimpeded by a partnership.

What is West Yorkshire currently doing?

It will also give the West Yorkshire Combined Authority much greater control over how public money is used to support services, deliver deals on fares to help make travel more affordable and encourage more people to use buses, and improve the information available to passengers.” Hang on! That doesn’t seem quite right…

While this pathway was lauded in the press as delivering Brabin’s pledge, there are several issues with this interpretation of the Government’s guidance.

First, it fails to explore the possibility of “unlocking a share of £3bn” by seeking the dispensation (Fig. 1). As we have already seen, West Yorkshire is particularly well placed to make the case to skip this step. 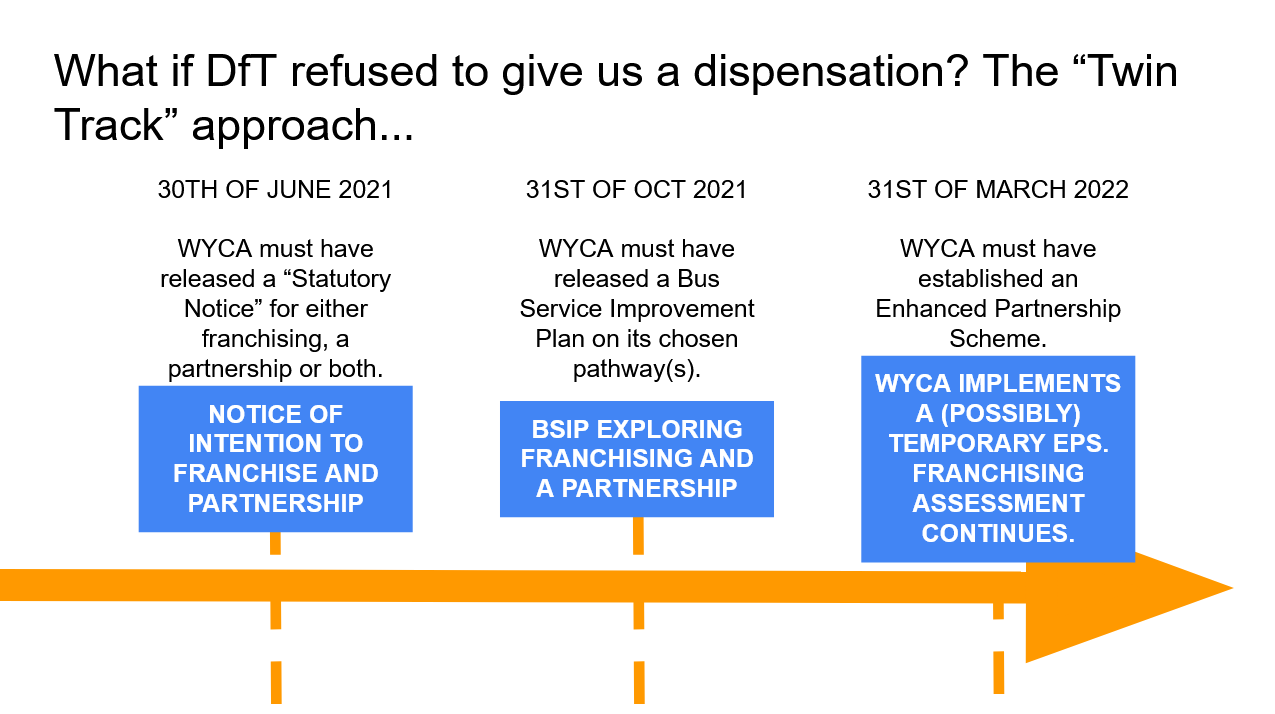 Even if the Government refuses to allow West Yorkshire to move forward unimpeded by a new partnership scheme, it could still release both Notices of Intent. This would allow it to progress its investigation into public control, while meeting the March 2022 deadline and thus retaining access to funding at that point (Fig. 2). 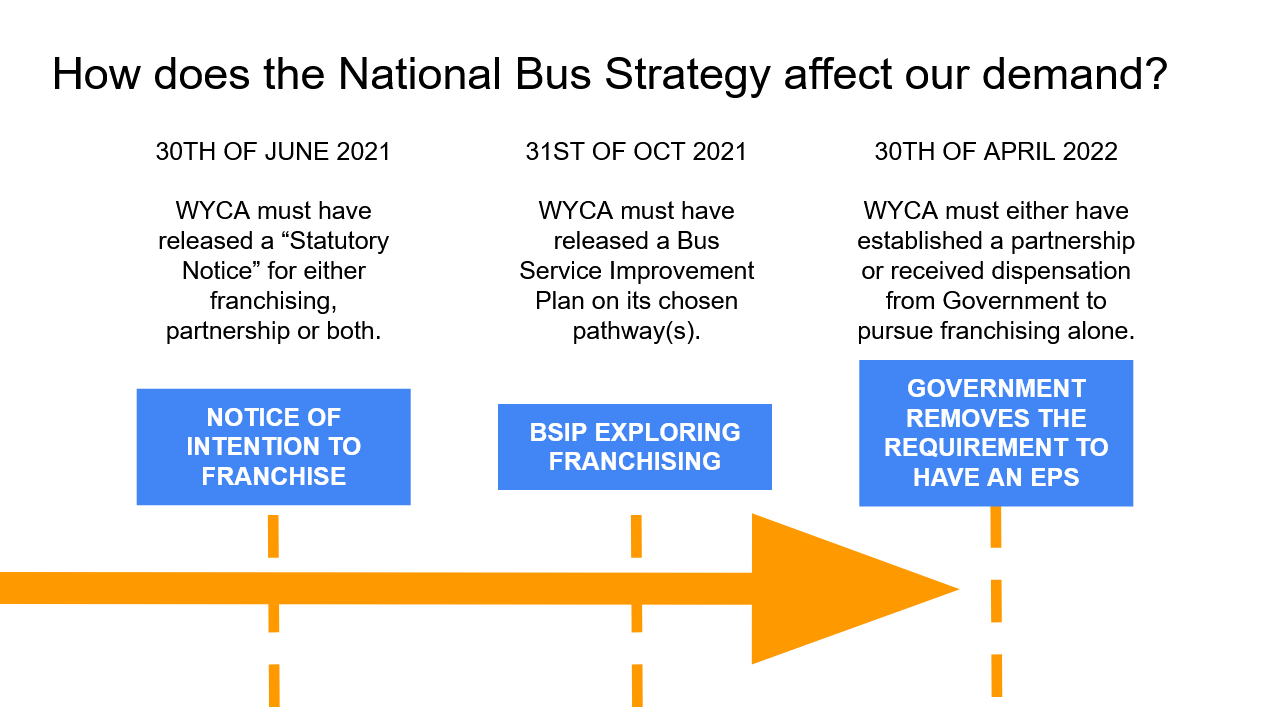 On the 24th of June, West Yorkshire Combined Authority will have its next meeting. The current advice being sent to that meeting is just to release the Notice of Intent to Prepare an Enhanced Partnership. The Council Leaders and Mayor will then vote on this.

A more ambitious plan would seek permission to skip the possibly distracting Enhanced Partnership Stage before the meeting in June, as this would allow West Yorkshire to deliver on public control as soon as possible.

If it were granted, the June meeting could vote for just a Franchising Notice in full knowledge they will keep access to funding through all the checkpoints. If it is not, they should not settle for just a partnership but release both Notices of Intent. This would open the door to start progressing the ambitious and necessary plan to bring our buses into public control, so they work for everyone in the West Yorkshire community.

What can we do?

While West Yorkshire’s new Mayor is now a key driving force behind policy in the region, it’s important to remember she must work in cooperation with the existing local council leaders.

These leaders have a key role in setting the direction of the Combined Authority. They will also have a vote on many of the decisions that allow public control to move forward.

Unfortunately, after a decade of austerity, many local leaders are wary of committing to radical change and so will likely push for the Mayor to adopt an Enhanced Partnership Scheme, rather than letting her pursue public control with full determination.

It’s essential that local people make clear the strength of support for this change. Consider writing a letter to the editor of your local newspaper, discussing why the leader of your local council must support Brabin and vote to start the official public control process on the 24th of June.

We will only win publicly controlled buses when people unite across the West Yorkshire region and demand that our leaders deliver on the Mayor's campaign pledge.

Photo by Ant Rozetsky on Unsplash

Back to the top

What can Yorkshire learn from Rojava?

Rojava is the light in the darkness that is Syria, an autonomous region of 4 separate but interrelated …

In the first part of Made In Leeds TV's 'On Closer Inspection', Leila Taleb from the Shared Skies Collective discusses the future of the North …